Chaos training for a strong back

For some years now, it has been a well-known fact that good posture depends on muscles and nerves interacting perfectly. Our senses work in a complicated, complex network of receptors and nerve tracts. They register external and internal impressions and convey them to the control centres in the brain. Additional information is provided by what are known as proprioceptors. They keep the nervous system constantly informed about the posture and position of the body and its extremities. However, a lack of exercise will stultify these vital functions. As a result, the muscles become weak, we start to lose the feeling for own body and often have to cope with back problems. But this does not have to happen. Clever minds have pooled their thoughts and produced exercise equipment that offers ideal training for the muscles and nerves. A plastic pipe filled with a liquid is one particularly successful example.

It's the design that counts.

It looks a little bit like a laser sword from the Star Wars films and is between 1.20 m and about 2 m long. Differing lengths and diameters mean that it varies in weight, and can therefore be used for large and small and for different training variations.

With two loops for the hands, (the single pipe which is about 50 cm long is also suitable for training with just one hand) the pipe can be used for a large number of exercises when standing, sitting or lying down. Sounds very simple, but the many possible exercises are a real challenge. No matter which movement is being performed, users must always try to keep the liquid more or less in balance. Physicists will now object that this is in fact impossible - and they would be right. Liquids are chaotic. The aim is therefore to minimise the chaos. But this works only when the body reacts immediately in all parts of the exercise.

Many groups of muscles and nerves are involved in the effort it takes to "control the chaos".

The calmer the liquid, the better. Many groups of muscles have to be used to achieve this aim. Muscles and nerves have to react swiftly to hold the balance and stabilise the body. This is excellent training for coordination and for the deep muscle groups that conventional strength training can't address. Experts also call them the autochthonous muscles. They convey information at a speed of up to 650 kilometres per hour. This incredible speed means that movements are not controlled deliberately by the brain but by reflexes triggered in the nerve cells of the spinal cord.

Interplay of the muscles improves

There are therefore many advantages in regular chaos training with a plastic pipe filled with water. It boosts strength and endurance, enhances posture, improves deep body perception and improves concentration. It is naturally also good for the heart and circulatory system. Reacting constantly to the liquid's movements reconciles muscular deficits and dysbalances while increasing intra- and inter-muscular coordination. In other words, cooperation between the muscles is improved (inter-muscular coordination) and the body gradually learns to use more muscular fibres in an individual muscle (intra-muscular coordination). The reward is strong, well functioning muscles and nerves with optimum prevention of backache. Initial scientific studies have already confirmed the positive effects.

Products in this sector with the AGR seal of approval

Exercises for strengthening the muscles

Kayaking
Muscle group: kayaking is an exercise for strengthening the muscles in your back and is used for warming up and cooling down.
Starting position: take one step forward, feet wide apart, hold the SLASHPIPE at shoulder width, arms slightly bent.
Movement: move the SLASHPIPE with a fl ourish from left to right. The exercise looks like kayaking.

Take one step forward
Muscle group: this is an exercise for strengthening the muscles in your legs and buttocks.
Starting position: stand with your feet wide apart, on your toes for your rear foot, looking straight ahead.
Movement: move your lower knee down but do not touch the floor. Do not push your front knee over your foot. Keep your back upright. Change sides.

Side tilt
Muscle group: the side tilt is an exercise for strengthening the oblique muscles in your abdomen and your back muscles.
Starting position: spinal column upright, stand with your feet wide apart, arms slightly bent, SLASHPIPE above your head.
Movement: sideways tilt of the SLASHPIPE to one side, as far as possible without feeling pain. Change sides. 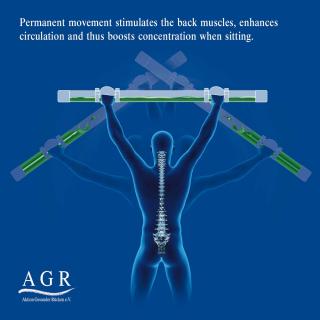